There are many veterans in the long line of our Halls, from my brothers and father, all the way back to my 3rd great grandfather in the American Revolution. My late husband and his father were Vietnam veterans, and my mother’s side of the family did their part during war times also.

I’ve decided to feature the only female veteran in our Hall line that I am aware of. She was an unpublished writer and had the grand name of Mercedes, but we just called her Aunt Mercy. She was my great aunt, my father’s aunt. Her father served, and was crippled by a bullet wound, in the Spanish-American War at the Battle of San Juan Hill.

While touring the U.S. with my two children in 2001, we spent some time with Aunt Mercy. Our little r.v. was being repaired, so we left most of our belongings with Aunt Mercy and rented a car for the east coast part of our trip. She had one request: she wanted us to go to the Women In Military Service For America Memorial in Washington, D.C. and look up her name.

The east coast trip was memorable for many reasons, but one of the most moving things that took place was typing “Mercedes Hall” into the computer at the women’s memorial, and then looking up to see her beautiful photo and service record (above) on a massive wall. Sara, Jon and I just stood and looked in awe. 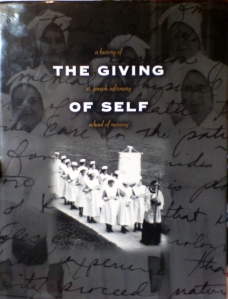 We got two color copies of the image on the wall and took one back to Aunt Mercy. I also have a book (see image), The Giving of Self; The History of St. Joseph Infirmary School of Nursing, which features a photo of my aunt’s 1939 graduating class. The image is blurry, so I did not include it here.

Aunt Mercy was a proud woman, yet she practically giggled when we told her about our visit to the memorial, and then brought out our souvenirs. She recounted more tales about her Navy Nurse adventures and we spent hours going over family photos and stories. She kept telling friends and family, “They went and saw me in Washington, D.C.!”

I’m especially glad that we included Aunt Mercy on our itinerary, because she passed away less than a year later, 10 days before her 86th birthday; she was the last of 11 Hall siblings.

I hope you enjoyed this Veterans Day post. It was good to revisit Aunt Mercy’s pride and happiness about her service for America.

12 thoughts on “Honoring Our Veterans; My Great Aunt Mercy”