Today’s horoscope was boring, so let’s skip it and go right to the good stuff:>) My adventures yesterday started when my neighbor/friend asked if I wanted to go for a drive to the Wynoochee Dam. For a cave dweller, I love a good adventure out in the world. We left at 12:30 and drove some highway, side roads and several unpaved roads for a couple of hours to reach the dam. It took longer than it should have, because the photo addict was on board. Greg and I have been on many photo journeys the last few years, and he’s pretty good at catching on to what kind of things I want to take photos of. Like this…

I’ll warn you now, I didn’t do well with taking pictures this day. My old Nikon would have been so much better. Me learning how to change the auto functions on this, otherwise great camera (Lumix ZS19), would have worked too. The light is the issue. Too bright and lots of white ruined most of my shots. Plus, the cold effects the camera, and man, was it cold!

Some turned out better than I thought they would, but I had to dump a lot. I’ll keep this one…

Dead fern made red by the sunlight hitting it. Frosted everything:>)
PHALL PHOTO 2013

My first and top favorite thing on this adventure was found miles into the southern region of the Olympic National Forest. Picture miles of forest, with some logged areas in between. All you can see is a few glimpses of the rolling hills to the north west and everything else you see are trees. Moss covered and coated in frost, where the sun hasn’t hit yet. We came to a clear cut next to the road and, “Stop!” “Back up, did you see that!?” I’m ready to jump out with my camera before he even gets backed up. It was a flippin’ Christmas tree! What made it a Christmas tree and not just another tree?

It was decorated with ornaments, shiny beautiful ornaments. In the damn middle of nowhere. At least 25 miles to anything but wilderness. The kind of person who would do that, is the same kind who carved that big bull on the beach, the kind that carved the beautiful face in the side of the sand dunes, the kind who left that big silk sunflower in a piece of driftwood on the beach, or the ones who build the driftwood shelters. All their work and energy would be taken over by nature in the very near future, but they did it anyway, for you and for me. A stranger’s smile and good feeling. Wow.

May I present The Wynoochee Dam and surrounding area? 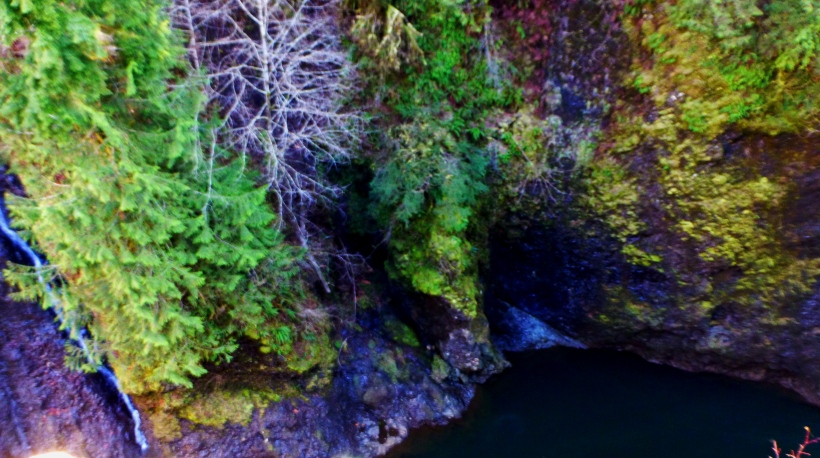 Okay, I’m not even halfway through, so here’s one more and then I will add a link to the rest when I get them on my photo site.

Thanks for stopping by. I hope you got a smile or two and some visual pleasure. Oh, and I found a fishing pole with reel (in the dark) on our way out:>) It must have fallen out of someone’s truck and I happen to see a glint of metal.

Here’s the link to the slide show of this trip. http://wp.me/p3J4Ab-7o There is hand made bridge, a fairy, fish, gnome homes, an incredible sunset on the lake, rambling streams, a river, ghost trees, the Moon with Venus, the last glow of day, and close-ups of frost. Oh, and the dam.

From writing challenge at Every Damn Day December

We would love to know what your thoughts are! Cancel reply